Jhon Goes In Center is an enrolled member of the Oglala Lakota Tribe on the Pine Ridge Indian Reservation in South Dakota. As well as being known as a silversmith, Goes In Center has mastered many traditional artistic techniques within his Lakota culture and many other contemporary techniques. Such mastered traditional Lakota techniques are stone and wood carving for traditional prayer pipes, bead and quillwork, feather-work, hide-tanning, rawhide work and related technologies utilized in Lakota utilitarian, ceremonial and artistic expressions.

He is a traditional-style dancer and has studied and created Lakota traditional dance regalia and accoutrements for not only himself, but for family, relatives and friends. Goes In Center considers these core skills and techniques as foundational to any other artistic expressions he has applied in his paintings, sculptures, metalwork and engraving. 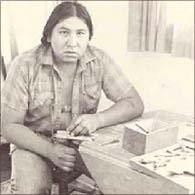 While pursuing his Museum Studies degree at the University of Colorado in 1974, Goes In Center attributes his inspirations to learn silverwork techniques and engraving by exposure to tools, time and space at the Henderson Museum restoration and preservation laboratories.

A self taught silversmith, Goes In Center researched the origins of Plains Indian Silverwork and discovered an inherent trait of his ancestors and how they incorporated new materials and techniques and made it all blend within the Lakota way of life. Since then and now, Jhon Goes In Center has chosen to express his creativity, skill and experience with in his own definition of Lakota-ness through his custom jewelry.

Goes In Center has studied under the tutelage of a nationally renowned firearms engraver, John Rohner. Since his study and application of engraving techniques, Goes In Center’s engraving mentor John Rohner states, “ In more than forty years of teaching, I have known no individual more adept in traditional decorative Plains Indian techniques than Jhon Goes In Center. The choice of this renaissance Lakota artist to specialize in metal work has elevated a craft to the level of “Fine Art”.”

Goes In Center has exhibited his work and lectured at the Smithsonian Institute’s Museum of Natural History. He has gone on to exhibit his work and has been recognized for his endeavors by winning various juried shows. His piece “Warrior's Cross”

won a first place at the prestigious Northern Plains Tribal Arts show in 1991 and placing in subsequent shows.

Goes In Center considers the inclusion of one of his jewelry pieces in an exhibition organized by Evan Maurer of the Minneapolis Institute of Arts his greatest honor. The exhibition: Visions Of The People, A Pictorial History of Plains Indian Life is an overview of Plains Indian art and art history from ancient petroglyphs to contemporary paintings. Goes In Center’s Plains Indian jewelry and artwork resides with many discerning individuals and collectors.